LUNCH WITH BOOKS: Lost History of Frederick Douglass in Wheeling 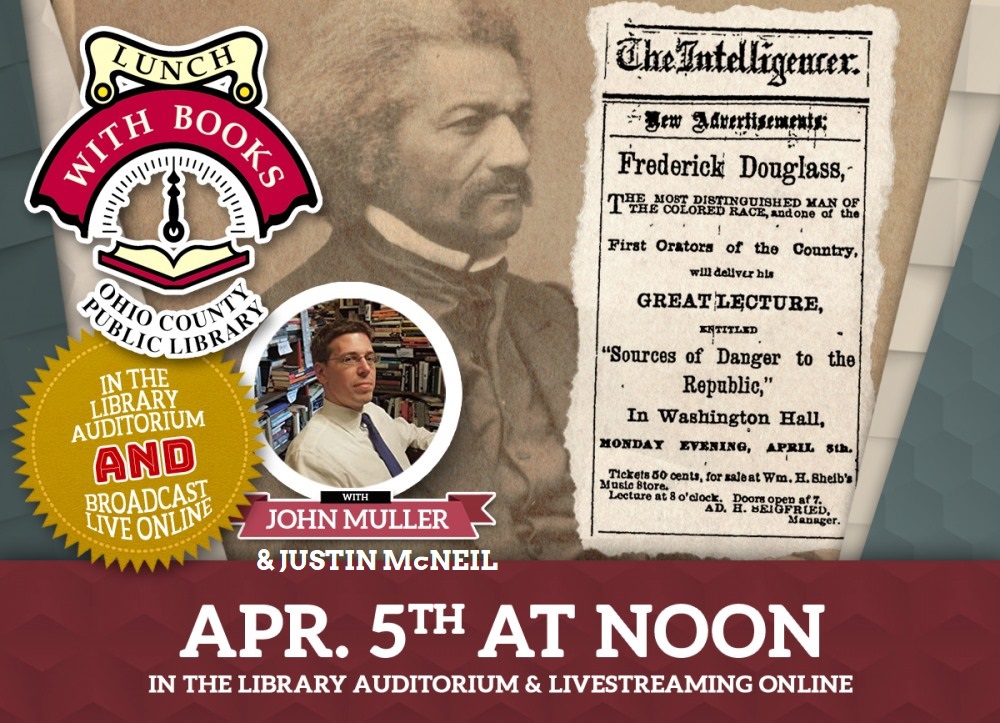 Internationally known, in life and afterlife, on both sides of the Atlantic Ocean as an orator, abolitionist, editor, suffragist and American reformist, the history and placement of Frederick Douglass in the field of Appalachian Studies has not been considered and recognized until now.

Following the Civil War, Frederick Douglass made notable visits to Wheeling, West Virginia in 1867 and 1884, speaking first at the original Washington Hall at the bequest of a literary society and nearly two decades later at the Opera House, which still stands today at 12th and Market Street in downtown Wheeling, as part of an Emancipation celebration. 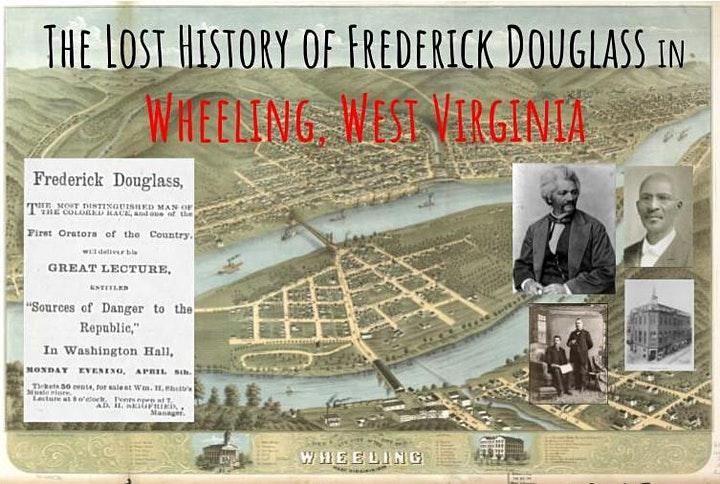 The Lost History of Frederick Douglass in Wheeling, West Virginia will focus on the relationship and associations Douglass had with several notable Wheeling citizens, including newspaper publisher, political insider and a leader of West Virginia’s statehood movement Archibald W. Campbell and Dr. Boswell Henson Stillyard, the first Black member of Wheeling’s City Council. In February 2021 Dr. Stillyard was profiled by Archiving Wheeling in an article researched by Local History Specialist at the Ohio County Public Library Erin Rothenbuehler.

The Lost History of Frederick Douglass in Wheeling, West Virginia will be presented for the first time at the Ohio County Public Library in Wheeling. The livestreamed in-person event, followed by a Q&A, will include maps, prints, letters, newspapers, photographs, ephemera and more from local, regional and national collections and archives.

In addition to being in-person in the Library auditorium, this program will be available to watch live on Facebook Live, on YouTube, and on the OCPL website's LWB Livestream page.  Log into your Facebook or YouTube account during the program to leave questions for John in the comments box. He will answer them during the live broadcast. 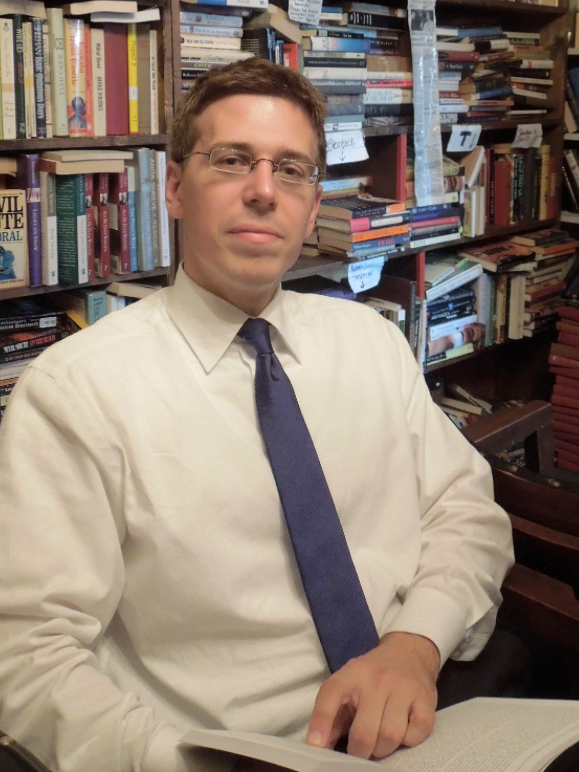 PRESENTER BIOS: John Muller, author of Frederick Douglass in Washington, D.C.: The Lion of Anacostia (2012) and Mark Twain in Washington, D.C.: The Adventures of a Capital Correspondent (2013), has presented widely throughout the DC-Baltimore metropolitan area at venues including the Library of Congress, Politics and Prose Bookstore, Newseum, American Library in Paris, Enoch Pratt Library, DC Public Library, Frederick Douglass National Historic Site and local universities. Muller is a frequent guest on Washington, D.C. radio stations and has been cited by the Washington Post, Washington City Paper, Cumberland Times-News and other publications for his local history research and subject matter expertise. He has been featured on C-SPAN’s BookTV and C-SPAN’s American History TV, broadcast airwaves of NBC4 (Washington), WDVM (Hagerstown) and radio stations WPFW (DC), WAMU (DC), WYPR (Baltimore), WEAA (Baltimore) and Delmarva Public Radio (Eastern Shore). For the past decade Muller has contributed hundreds of articles to local and national print and online news sources, including the Washington Informer. In 2019 Muller presented on the history of Frederick Douglass throughout Western Maryland, including the Washington County Free Library and Frostburg State University.

Justin McNeil, an IT professional who has serviced government agencies, nonprofits, corporations, financial and banking institutions and small-businesses within the DC-Baltimore metropolitan area, Western Maryland and Potomac Highlands for the last decade, is a doting husband and father of 3, ADOS historian, essayist and playwright. McNeil has been featured in the pages of the Washington Post, contributed columns to the Washington Informer and been interviewed on the television and radio airwaves of News Channel 8 (Washington, D.C.), WBAL (Baltimore), WPFW (Washington, D.C), WEAA (Baltimore) and ABC 47 (Maryland’s Eastern Shore). McNeil attended Morehouse College in Atlanta, Georgia.

FEATURED BOOK:Frederick Douglass in Washington, D.C.: The Lion of Anacostia, by John Muller (The History Press, 2012)
[  Check out the ebook or the audiobook through Hoopla Digital with your OCPL library card  |  Purchase a copy online through bookshop.org to support local book stores or visit indiebound.org to find Frederick Douglass In Washington, D.C. in a bookstore near you.  |  Purchase online through Amazon ] 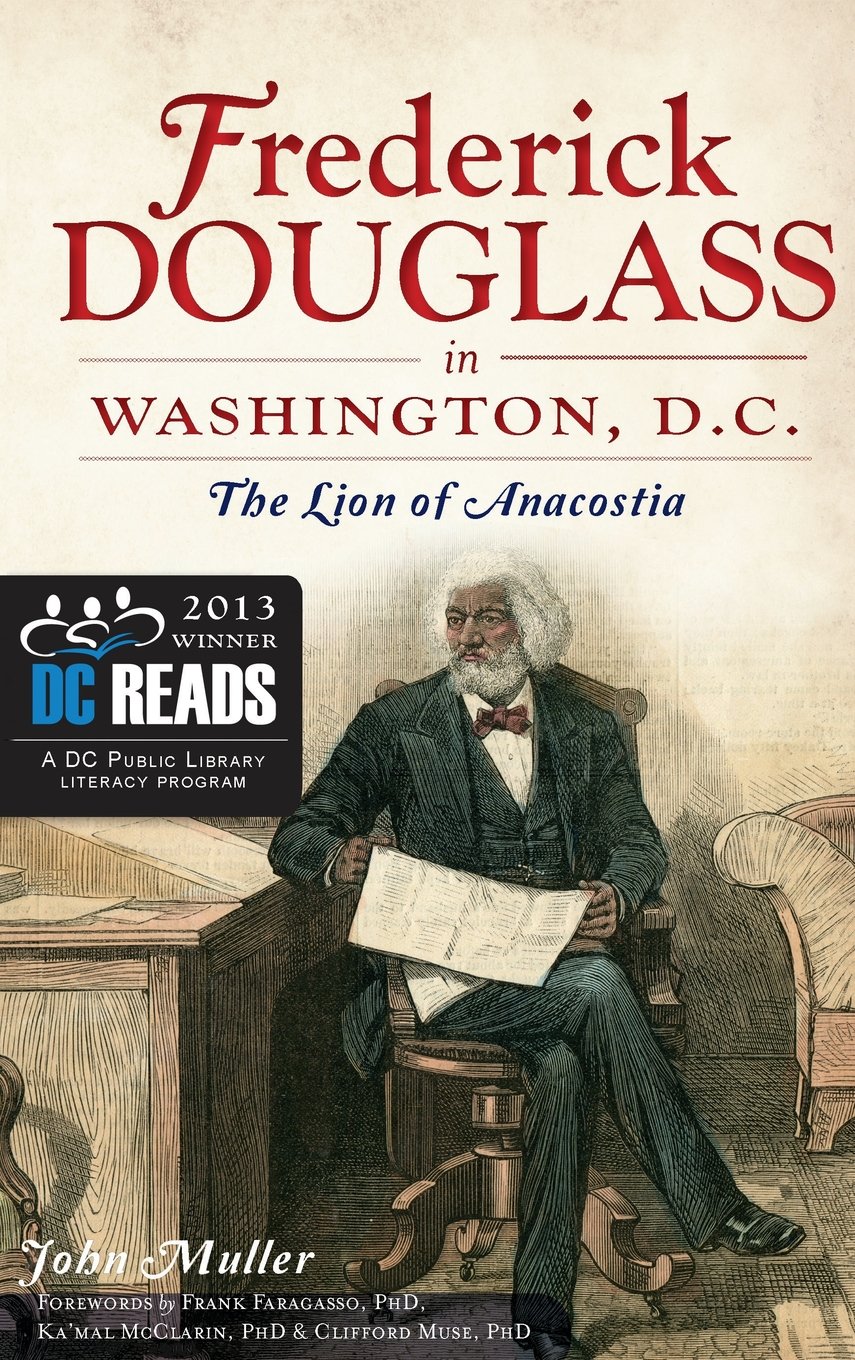 The remarkable journey of Frederick Douglass from fugitive slave to famed orator and author is well recorded. Yet little has been written about Douglass's final years in Washington, D.C. Journalist John Muller explores how Douglass spent the last eighteen years of his life professionally and personally in his home, Cedar Hill, in Anacostia. The ever-active Douglass was involved in local politics, from aiding in the early formation of Howard University to editing a groundbreaking newspaper to serving as marshal of the District. During this time, his wife of forty-four years, Anna Murray, passed away, and eighteen months later, he married Helen Pitts, a white woman. Unapologetic for his controversial marriage, Douglass continued his unabashed advocacy for the rights of African Americans and women and his belief in American exceptionalism. Through meticulous research, Muller has created a fresh and intimate portrait of Frederick Douglass of Anacostia.

REVIEW:
John Muller has become one of America's premier young historians. His latest work on Frederick Douglass is an example of what history writing should be. Lively, pithy, humorous, and, by turns, grave and unrelenting, Muller's Douglass is Douglass as he was. The former slave comes to life in Muller's capable hands and so does Howard University, Anacostia, and post-Civil War Washington. America is fortunate to have a son like John Muller who knows that American success today and in the future has its beginnings in a 19th Century world that Frederick Douglass did much to create.
—Mark H. Metcalf

"Lunch With Books" is the library’s flagship program for adult patrons. These lunchtime programs feature authors, poets, musicians, historians, and more every Tuesday at noon. Bring lunch (to the Library Auditorium or your computer), feed your brain!