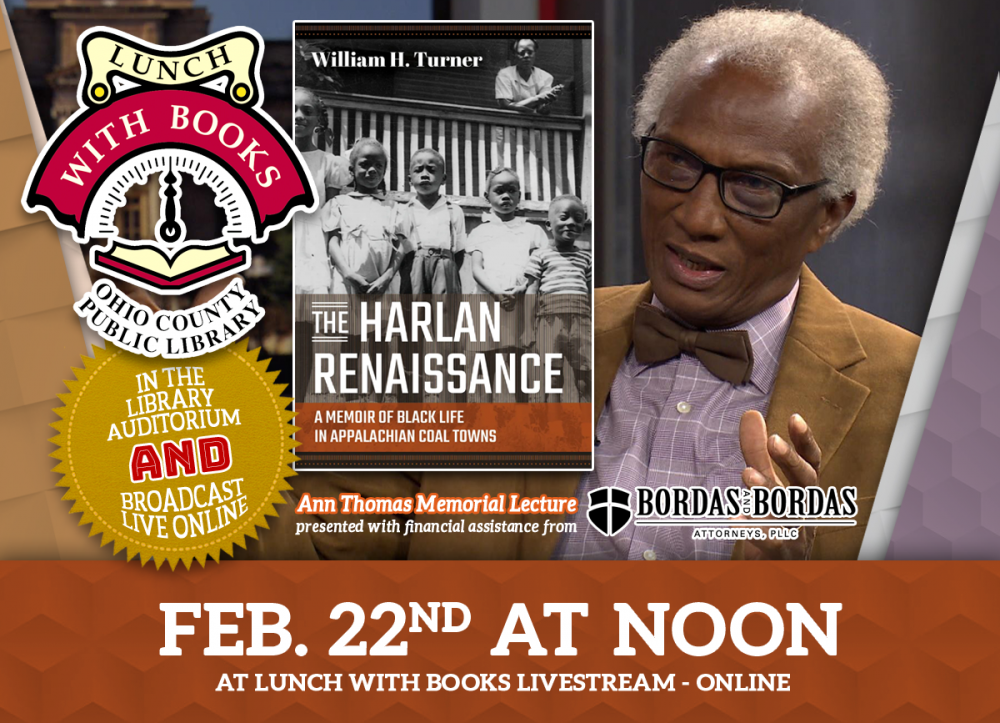 The Harlan Renaissance: Stories of Black Life in Appalachian Coal Towns is an intimate remembrance of kinship and community in eastern Kentucky’s coal towns written by one of the luminaries of Appalachian studies, William H Turner. Turner reconstructs Black life in the company towns in and around Harlan County during coal’s final postwar boom years, which built toward an enduring bust as the children of Black miners, like the author, left the region in search of better opportunities.

The Harlan Renaissance invites readers into what might be an unfamiliar Appalachia: one studded by large and vibrant Black communities, where families took the pulse of the nation through magazines like Jet and Ebony and through the news that traveled within Black churches, schools, and restaurants. Difficult choices for the future were made as parents considered the unpredictable nature of Appalachia’s economic realities alongside the unpredictable nature of a national movement toward civil rights.

Unfolding through layers of sociological insight and oral history, The Harlan Renaissance centers the sympathetic perspectives and critical eye of a master narrator of Black life.

NOTE: This program is brought to you in part by Bordas and Bordas Attorneys, PLLC.

Tuesday  |  2022 at noon
LWB LIVESTREAM: Program to be announced

ABOUT THE ANN THOMAS MEMORIAL LECTURE:

Ann was a wonderful, optimistic, courageous, and genuinely kind woman, and a dedicated patron of the library and library programs. After she passed on February 22, 2019 (having bravely battled cancer and endured suffering for many years), we decided to create an annual memorial lecture series at the library in her honor.

Our first speaker was Dr. Joe Trotter of Carnegie Mellon, who talked about his book, Workers on Arrival: Black Labor in the Making of America on Feb. 18, 2020. Watch the video of Dr. Trotter's talk on YouTube.

Our second speaker, on Feb. 23, 2021, was Crystal Wilkinson, the award-winning author of The Birds of Opulence (winner of the 2016 Ernest J. Gaines Prize for Literary Excellence) and Associate Professor of English in the MFA in Creative Writing Program at the University of Kentucky. Watch the video of Crystal's talk on YouTube.

We are honored to have Dr. William H. Turner as our third speaker in this series.

PRESENTER BIO: William H. Turner, PhD, the fifth of ten children, was born in 1946 in the coal town of Lynch, Kentucky, in Harlan County. His grandfathers, father, four uncles and older brother were coal miners.

Bill has spent his professional career studying and working on behalf of marginalized communities, helping them create opportunities in the larger world while not abandoning their important cultural ties. He is best-known for his ground-breaking research on African-American communities in Appalachia, but Bill’s work is universal. As an academic and a consultant, he has studied economic systems and social structures in the urban South and burgeoning Latino communities in the Southwest. What he strives for on behalf of his clients and their communities is what we all want: prosperity, understanding and respect.

Today, Bill and his wife, Vivian – the retired President of the R.J. Reynolds Foundation in Winston-Salem, N.C. – live near their children and grandchildren in Houston.

Bill is the former Dean of Arts and Sciences and Interim President, Kentucky State University, Vice President for Multicultural Affairs, University of Kentucky; and, Distinguished Professor of Appalachian Studies and Regional Ambassador at Berea College. He co-edited the path-breaking textbook Blacks in Appalachia and thematic essays on Black Appalachians in the Encyclopedia of Southern Culture, and the Encyclopedia of Appalachia.
Research associate (1979-1991) to Roots author Alex Haley, who said, “Bill knows more about black people in the mountains of the South than anyone in the world.”

— Listen to Bill Turner on the Black in Appalachia podcast

REVIEWS:
“A warm and insightful memoir of Black life in Appalachia’s coal camps that offers a bounty of correctives to the persistent myth that all mountain people are white and all poverty is self-made.”
— Elizabeth Catte, author of "What You Are Getting Wrong About Appalachia" and "Pure America: Eugenics and the Making of Modern Virginia"

“Heartfelt portraits that are original, compelling, revelatory, and deeply human.”
— David Ritz, author of "Respect: The Life of Aretha Franklin"

“One of the oldest and most enduring myths about the Appalachian Mountains is that they are now and always have been overwhelmingly populated by white Scots-Irish. Dr. William H. Turner has written a new book, The Harlan Renaissance: Stories of Black Life in Appalachian Coal Towns, that kills that myth about whiteness and, for good measure, buries several more myths as well.”
—Daily Yonder

“It’s a book only Turner could write, and without it, this slice of American culture would be lost forever.”
—Berea College Magazine

"Lunch With Books" is the library’s flagship program for adult patrons. These lunchtime programs feature authors, poets, musicians, historians, and more every Tuesday at noon. Bring lunch (to the Library Auditorium or your computer), feed your brain!