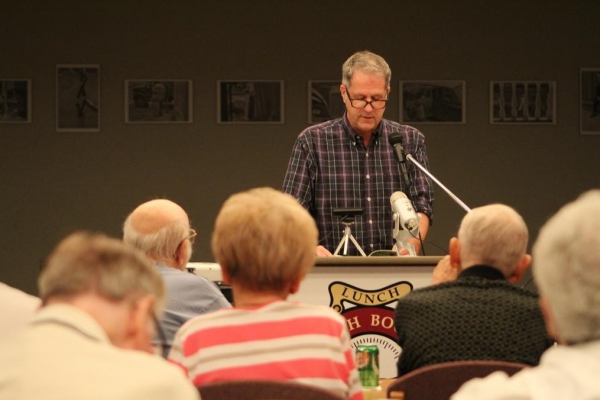 Tom Bredehoft, author of Foote: A Mystery Novel, introduced the Lunch with Books audience to the tales of Big Jim Foote on Tuesday, August 9. The tale of Big Jim, a private investitator in Morgantown, WV, who finds himself at the center of two murder investigations, are written with humor and respect for a cryptic beast - bigfoot. The story's central character, Big Jim Foote, has a secret he can never reveal - he is actually a bigfoot living in plain sight.

Bredehoft, a Morgantown resident, incorporates Appalachian culture such as ramps into the book. He also hopes that the tales of Big Jim will continue and perhaps incorporate other West Virginia crypicial creatures.

Tom Bredehoft lives in Morgantown, West Virginia. In an earlier life, he was an English professor specializing in medieval literature.

Foote: A Mystery Novel can by purchased online from WVU Press.

In honor of the Italian tradition of marking the Feast Day of San Rocco, August 16, local musical group Faire May will present a set of Italian music accomapnied by Italian dance from Ohio Valley International Dancers. Also known as Saint Roch, the ‘plague saint,’ Rocco was a fourteenth-century pilgrim famed for healing plague victims. Having contracted and survived the dread disease himself, he's usually depicted lifting back his garments to reveal the plague bubo on his thigh and is often accompanied by a dog. Saint Rocco's Feast Day commemorated the end of a severe outbreak of the plague in Venice in 1576. The tradition was brought by Italian immigrants to New York, the Pittsburgh area, and all over the United States. The festival usually includes a procession with a statue of San Rocco, music, food, celebratory dance, and a Mass. Faire May is a traditional music band specializing in enjoyable folk music from the near and distant past. This will be their longest foray into Italian folk music.